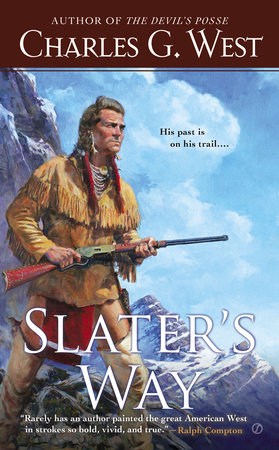 Ne’er-do-well small-time outlaw John Slater Engels becomes the victim of a hanging when he kills a man in a saloon fight. His death leaves a desolate widow, a young son, Jace, and Engels’ partner, Henry Weed. Weed, a man of little character moves in on his late partner’s widow, much to the disgust of young Jace. Trouble comes early for Jace when he determines to recover his father’s body from the hanging pole. In the process, he is forced to shoot a man. To escape a posse, the boy flees to the nearby mountains. He is fortunate to encounter Teddy Lightfoot who lives with a small village of Crow Indians who have chosen to live in the Absaroka Mountains instead of going to the reservation. Jace thrives in that environment and grows to be a respected scout and hunter. His services as a scout for the army cause him to become hated by Iron Pony, a feared Sioux war chief. Iron Pony, however, is not the worst trouble awaiting the young scout, who only goes by his middle name, Slater.